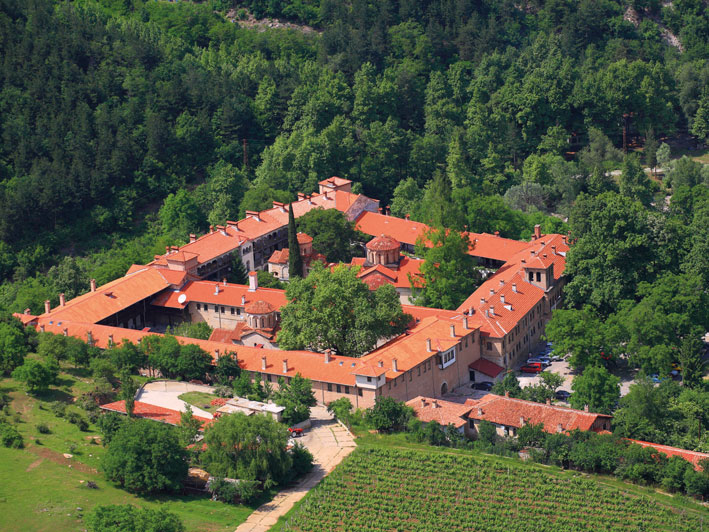 Bachkovo monastery is the second largest monastery in Bulgaria. It is beautifully situated on a ledge, on the right from the Valley of Chepelarska River, close to the village of Bachkovo, 10 km from Asenovgrad and 30 km from Plovdiv. This easy accessibility makes it the second most visited monastery in Bulgaria. During the weekends and on big orthodox holidays large groups of pilgrims and tourists come to pay a visit and spend a few relaxing our in the picturesque surroundings.

Even if the Bachkovo monastery survived the first coup of the Ottoman invasion, it was not spared later one and similarly to other cloister, was raided and ruined down. It was restored towards the end of the 15th century with the dining hall having been reconstructed in 1601, and the present-day church, Virgin Mary, – in 1604.

The wall-paintings of the dining hall, finished in 1603 by an unknown master, are particularly impressive for their artistic value. The church, on the other hand, also boasts with beautiful frescoes, but what draws mostly on visitors is its icon of Virgin Mary, believed to be wonder-working. A long queue of pilgrims wishing to say their prayers to the miraculous image of the God Mother, often starts far outside the entrance of the church.

Besides the main church, the complex also has two smaller shrines: one called St Archangels (13th – 14th c.) and standing in the northern part of the inner yard (next to the main church) and another one, named after St Nikola (1834-1837). The St Nikola church rises in the southern part of the yard and is worth visiting for the well-kept paintings of the famous artist Zahari Zograf (including a portrait of the very artist himself), finished in 1841.

The monastery estate is almost 8000 sq.m and about 440 meters above sea level. It includes two yards and four churches. The monastery has 18 chapels, 10 in Asenovgrad and 8 around it. The nearby Chepelarska river, which the locals call ‘Chaja’ has been the monastery trout fish supplier for a long time.